There are 3 default tabs that will appear for every project. A project can have additional tabs that will need to be configured by Pisys Support to be visible in the project edit screen. Let’s have a look at the most common tabs starting with the Basics Tab.

A project will always belong to a company. A project has a control group, and this cannot be changed once this project has actions. We will talk about Control groups at the Administration section of this user guide.

The short name field can be used to set a prefix which can be used to auto generate project action numbers (if enabled). For example, if we set the project short name to be “ATMS Demo” for the project shown and the auto generate “Project Action Number” feature is enabled then every time a new action is created it will have project actions numbers like “ATMS Demo – 001” where number at the end (001) will be incremented for each new action. The Parent Project dropdown allows you to move the selected project (and the portion of the project tree below it if it has sub-projects) to a different part of the tree.

The “No New Actions Allowed” checkbox, if enabled, prevents actions from being created for the selected project. The project will not be deleted, and it will be shown on the “Select Project” tree when a new action is being added but the user will not be able to select it. 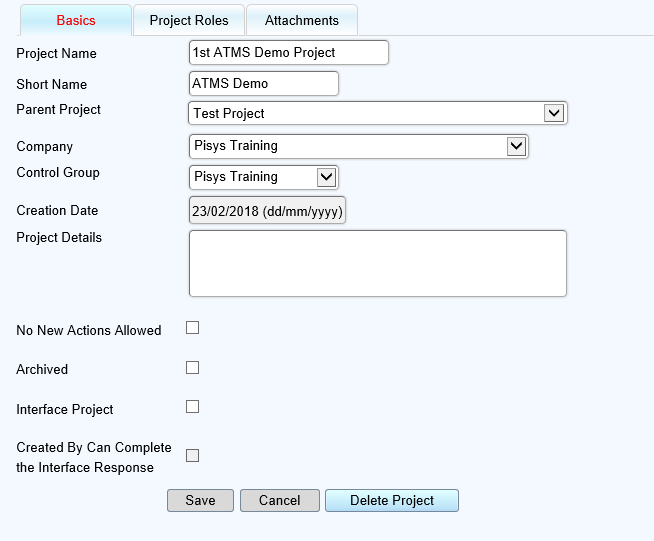 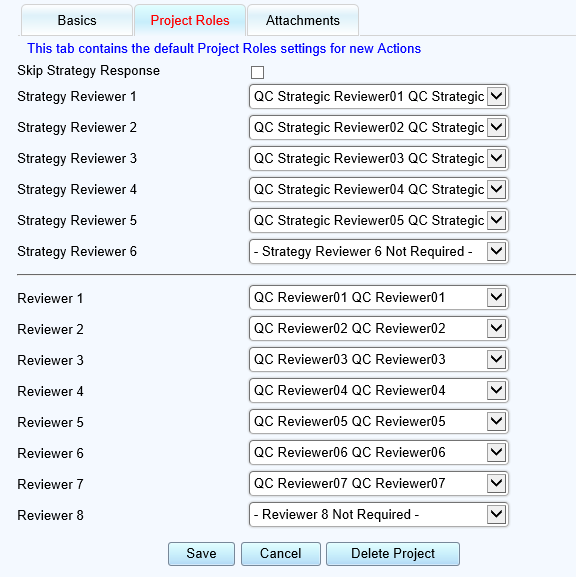 The additional “Strategic Reviewer” roles are optional. If a user selects names in any of these roles ATMS™ will create an additional stage in the action lifecycle as follows:

If the project has none of the Strategic Reviewers selected, then when an action is created it will have a state of ‘open’ before going through the review/approval workflow and being marked as complete. The review process can have an unlimited number of people set against it.

If the project has one or more of the Strategic Reviewers selected, then when an action is created instead of going straight into the normal review/approval workflow it will instead go to someone to indicate a strategy for completion. Once this strategy has been created it can be reviewed by an unlimited number of “Strategic Reviewers” who can approve or reject the strategy in the same way as actions are reviewed. Once strategy review is complete the action is “open” and can be completed in the normal way.

If you have any attachments relevant to the project (as opposed to individual actions) you can attach them in the same way as you would attach files to actions - these attachments will be available from the “Attachments” tab on project edit screen and “Project Details” tab on action edit screen.

Table of Contents
Projects Tab
Adding a New Project
We use cookies to ensure that we give you the best experience on our website. If you continue to use this site we will assume that you are happy with thisOkRead more