In the workflows mentioned in the previous section we focused on the stages and individuals involved while processing an action so let’s now see it in action.

When an action is raised, one or more individuals will receive a notification email depending on how the system has been configured. They will then log in to ATMS™ and open the action for which they are responsible, add any notes which may be required and indicate the completion of the stage.

The action then gets passed to the next approval level, with everyone indicating completion or rejection, until the action has been finally approved and closed out by the relevant lead.

If the system is configured to allow the Owner of the action to reassign actions, then they can reject any action and reassign them back to the Creator. They can leave an explanatory text either in the Action Notes or entered on the email preview page. Action status emails are sent to designated individuals with the Audit & Action Notes section automatically updated to reflect any status changes.

Let’s now look at an example. An action has been created and assigned to “StrategyCreator1”. It has a status of: Open for Strategy Response. A new action will have this status and it will be outstanding on Strategy Creator to complete the Strategic Response.

The Basics Tab tells “StrategyCreator1” what they need to do. At this stage they will need to complete the strategy response so that the action can move on to the next person in line. They can consult the “Attachments” tab to see any supporting files and they can also look at the “Audit” tab to see both the history of the action and any changes made to any of the fields or action status.

“StrategyCreator1” has indicated that they have completed all work on the action they were assigned, and that the action response is complete - it must now be signed off by the rest of the people in the list of strategic reviewers and reviewers - in this case “QC Strategic Reviewer01”.

Depending on how the mailer has been configured, “QC Strategic Reviewer01” will get an email telling them that an action requires their attention, and when they log into the system they will see the action.

An example of the email is shown below. However, all email types can be edited to change their heading, body and footer so depending on how your ATMS™ instance is configured emails may look different in your system. 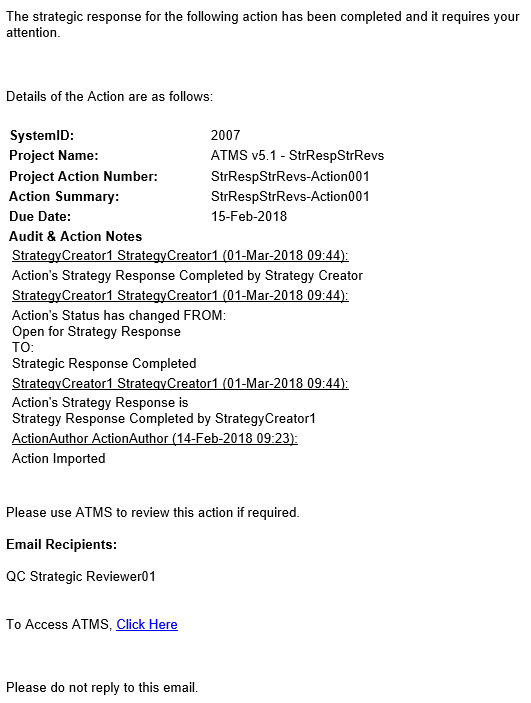 Rejection of the action at any stage will lead to the status being reset to Re-Opened for Strategic Response or Re-Opened for Action Response and sent back to the beginning of the chain for re-work.

Table of Contents
No Strategic Review or Strategic Response
We use cookies to ensure that we give you the best experience on our website. If you continue to use this site we will assume that you are happy with thisOkRead more