Case Study: This Pisys customer – a well-known Japanese engineering firm – introduced our cloud-based Permit to Work system on a $985.7 million construction project of a new fertiliser plant in the Caspian Region, which is managed remotely from Japan.

The whole construction project benefits from increased safety, better communication across different languages and reduced waiting times for permits to be approved.

This customer was looking for a robust, simple to use, simple to introduce electronic system that could:

Pisys worked closely with this customer to understand their current system, which consisted of flow charts, procedures and multiple paper forms

The Pisys team then customized the ‘off-the-shelf’ PTW system, and the fine-tuned the system to do exactly what the customer required.

For some of this, the software development team had to get involved, namely, to create SMS notifications, email re-direction and a form to enter continuous gas testing.

Extra development work was organized as a separate software development project, which ran side-by-side with the customisation and implementation of the PTW system.

Another side-project was the addition of the customer’s 15 detailed plot plans of various areas of the construction site, which was done by the Pisys team.

Throughout the customisation and development process, the Pisys and customer teams kept in close contact.

To help the Japanese/Russian teams visualize what their software will look like and how it will be used, they were given access to a ‘sandbox’ system, which they could access themselves and try out the system while it was being developed.

‘Roles’, associated with specific user rights, were created, and each of the 160 users was assigned a role, (e.g. Receiving Authority).

The screenshot illustrates the different rights a user can have – e.g. a user might be allowed to create, edit, approve, reject, suspend or hand back permits, or a combination of these, either for a single type of permit, or all types of permit.

In this example, the ‘Receiving Authority’ can perform all actions on a permit EXCEPT hand back a Limit of Electrical Access permit.

This screenshot shows all workflow options (e.g. create, reject, approve, suspend, hand back), and the check-box for enabling email notifications to be sent at each of these stages in the workflow. 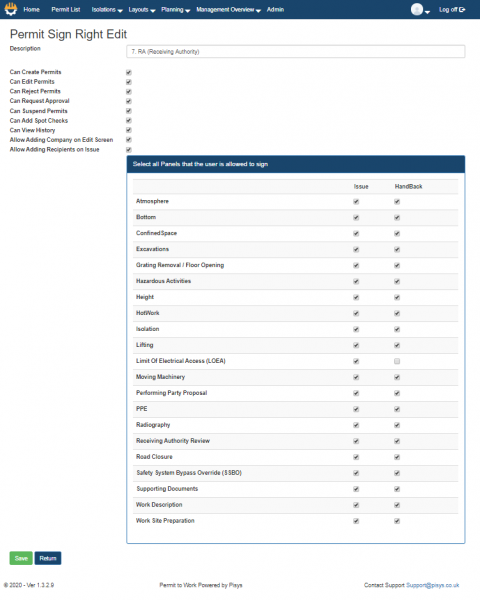 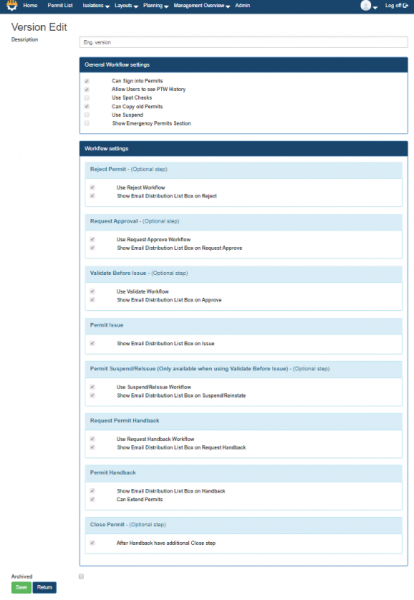 15 detailed plot plans, which can be viewed by all teams everywhere, show permits as coloured dots in their location.

Each permit goes through a multi-stage approvals workflow before any work can start. The PTW system keeps the approvals process on track by sending automatic emails and SMS messages to teams of key people, avoiding unnecessary delays caused by missing approvals.

Following the success of this project, the customer is now looking to replicate this PTW system for another construction project – this time in dual Chinese / English language.